Okay okay, I was a bit too enthusiastic about the new GitHub GUI app last week. It does have issues, which will hopefully be solved soon. I hit one specific issue, yet also found a workaround which helped me and may help you — thankfully, for all the graphical glory there's still a powerful set of command-line Git tools available, which can help us out on a bad day.

The problem is that when committing a large(ish) file from the Windows GitHub client, after the commit is done, sometimes it is not possible to see a proper difference summary between this and the previous version of the file — the diff display says that “The diff is too large to show here”, as shown below. In my tests it happened on files larger than 300-400 rows.


It is important to note that the root of the problem (too many changes) is also visible on the GitHub site, so the issue is in the actual commit process, not in the display. It is on the server that you can see what the system thinks was actually changed — even if you changed just one line of code, it shows the whole previous file as deleted, and the whole new file as being added.

Yet it is also very very odd that this doesn't happen reliably — sometimes the client detects and submits text changes just fine!

So, if and when this happens, you can use the “Open a shell here” command from the repository tools: 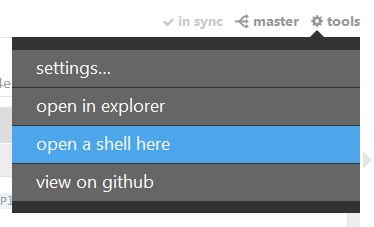 It will open a command-line (non-standard one, depending on your config), in which you can perform the following actions:

This action marks the file(s) to be committed. You can repeat it for as many files as you need. Then:

This action performs the commit of the previously marked files to the local repository.

If you were using Git from scratch, you would need to configure a so called “remote”, a remote (yes) location (or several) that you deal with. It is customary to name the master location as “origin”:

Yet with GitHub GUI client, this remote is already configured for you, so, if you try to configure it again (as I did, or the pedant in me), you'll get the following capital error:

Then all you need to do is push it to the origin remote (from your master branch):

Done, and done. The diff on the file now looks as it should, highlighting the changes lines correctly:


Funny that in my tests I would sometimes get incorrect work on GUI client — and correct work of command-line, versus some cases where the client works find — but the command line one doesn't. So only use this solution if you need it — i.e. when the file you try to commit doesn't show its diff properly, as described above.

So this is definitely not the bottom of the issue, but still a way to work around it. And a lesson on how to commit files manually — not that difficult, after all!

I wonder if there is a way to silently roll commits back on the client — so your advice would be much appreciated. What I mean is that when the above problem happens, I've already committed a file, and when I revert the commit it is still visible in history — which looks messy, especially if you plan to put this version into a pull request of someone else's repository — they will see your back-and-forthing as individual changes. If you can recommend me a way to permanently delete such failed commits, so they're not visible to anyone — I'd be grateful!

Oh, hey, and I've made my first pull request to the LiveStreet CMS code (a pull request is when I changed something and ask the project owner whether they would like to accept these changes into their code — I'd call it “push” request, but oh well) — even if it doesn't get accepted (though I'd like to know the reasons) it is still a valuable experience. I'll try not to boast too much about it :)

Take care, and till next time.